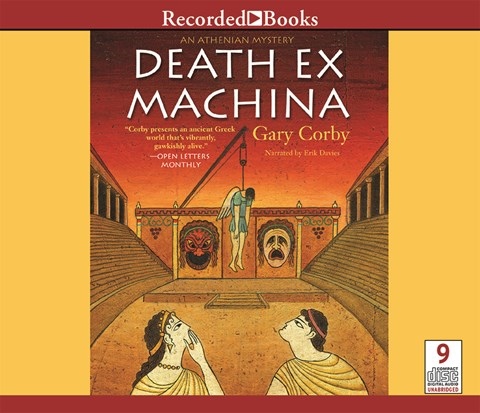 The fifth Nicolaos and Diotima mystery takes place during the largest arts festival of the ancient world, the Great Dionysia. Erik Davies does a serviceable narration, although his energy lags when author Corby explains or defines some piece of Greek minutiae. A series of mishaps has befallen the acting company that is preparing to present SISYPHUS, by Sophocles. The superstitious actors believe a ghost is responsible, but Nicolaos and Diotima are convinced that the culprit is more flesh than phantom. Theokritos, high priest of Dionysos, Nicolaos, and Diotima publicly undertake a fake exorcism. Their efforts fail, however, when one of the actors is found hanged. Davies's characters are credible--and with suspects galore, a clever puzzle, and well-researched ancient history, prepare to learn while you listen. S.J.H. © AudioFile 2015, Portland, Maine [Published: OCTOBER 2015]