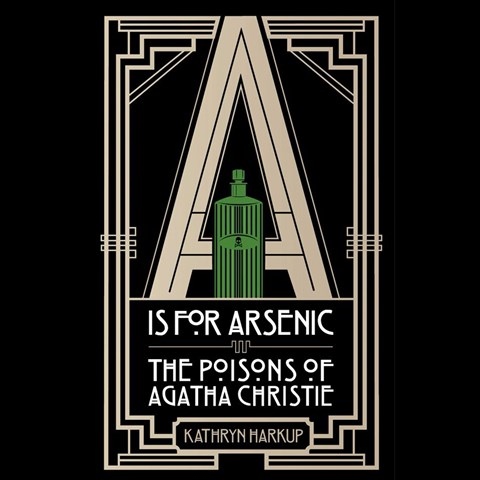 A IS FOR ARSENIC The Poisons of Agatha Christie

Released just in time to celebrate Agatha Christie's 125th birthday on September 15, this is essential listening for both aficionados of the Queen of Mystery and anyone with a morbid interest in dangerous chemicals. Narrator Beth Chalmers's demure British accent is easy to listen to and quite addicting. Harkup, a delightfully nefarious chemist and Christie fan, takes listeners through all the poisons used to off the characters in Christie's novels--their individual histories and their various ill effects on the human body before death ensues. The subject matter itself is grim, but Chalmers's buoyant tones perfectly suit the well-researched and good-humored text. Fascinating and shocking at times are the various factoids such as arsenic have been widely used in the nineteenth century for seemingly benign purposes--from coloring wallpaper to clearing up acne. The chapters--"B is for Belladonna," "C is for Cyanide," et cetera--go on to discuss other poisons in a ghastly alphabet that would make Edward Gorey proud. Listeners hear about Christie's personal history researching chemicals as part of her service as a nurse during both world wars, and about how those who praised her mysteries included the medical community, who lauded her accurate depictions of the effects of the poisons upon unsuspecting victims. At times, Harkup veers too much into the technical aspects of her topic, but Chalmers's steady pace and clear enunciation keep listeners engaged until the next fascinating topic surfaces. E.E. © AudioFile 2017, Portland, Maine [Published: JUNE 2017]