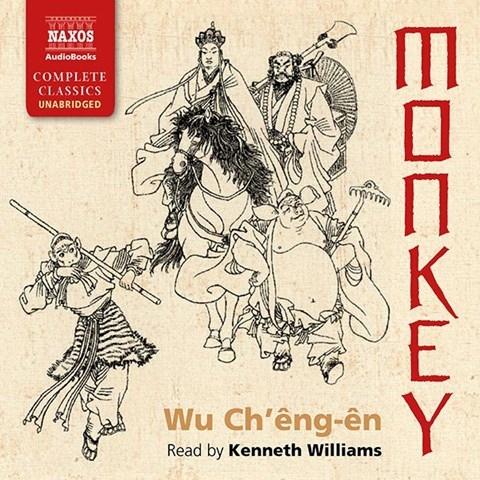 Kenneth Williams--best known from the British "Carry On" films--gives an extravagantly theatrical performance of Waley's adaptation of a Chinese classic (JOURNEY TO THE WEST), matching the fantastic world of the story, filled with Chinese deities and monsters and Monkey's larger-than-life shenanigans. Williams provides many character voices, some rather silly, rolls his r's, exclaims, declaims, and verbally "carries on," but avoids going over the top by changing to a sedate narration at well-chosen intervals. He fills China with an assortment of British class and regional accents, but it works. An echoing sound in this archival recording, no worse than in some theatrical recordings, fades from notice without distracting. It's a bravura performance of a delightful text; Naxos deserves thanks for making a great listening pleasure available again. W.M. Winner of AudioFile Earphones Award © AudioFile 2016, Portland, Maine [Published: APRIL 2016]