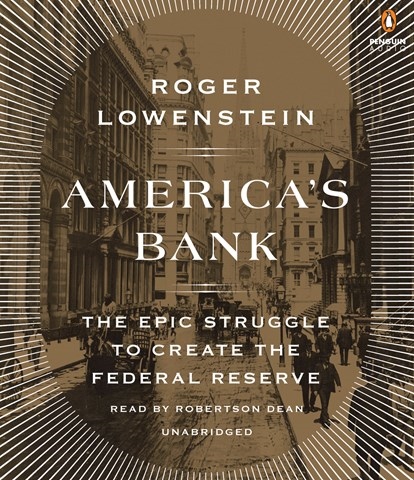 AMERICA'S BANK The Epic Struggle to Create the Federal Reserve

The creation of the Federal Reserve is a story that needs a businesslike narrator, and Robertson Dean, with his confident baritone, is well suited to the role. Not that this audio is plodding: Lowenstein is one of the country's best financial journalists, and his lucid story of the central bank's founding includes a surprising amount of drama and intrigue. There is no dialogue, however, so Dean has little opportunity to vary his voice as he represents the major characters, including Presidents Roosevelt, Taft, and Wilson, as well as the lesser-known financiers who created the Fed just before WWI. As a result, the listener may find it a challenge to recall all of the characters. D.B. © AudioFile 2015, Portland, Maine [Published: DECEMBER 2015]