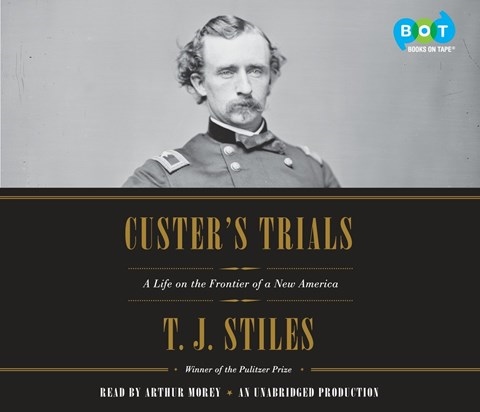 CUSTER'S TRIALS A Life on the Frontier of a New America

This biography of George Armstrong Custer's up-and-down life is narrated by Arthur Morey. The general's famous final battle with the Lakota and Northern Cheyenne at Little Big Horn is only an epilogue in Stiles's book. Other aspects of Custer's life--two court martials, campaigning with Andrew Johnson, and a stint at horse breeding--were less than glorious. But this is a serious biography, so Arthur Morey doesn't dish with malicious delight at Custer's romantic liaisons and gambling habit. Morey reads with a steady clarity that lets Custer come alive through documents of the period. At the same time, the book thoroughly examines the national atmosphere that led to a historic ne'er-do-well's ultimate defeat. J.A.S. © AudioFile 2016, Portland, Maine [Published: APRIL 2016]