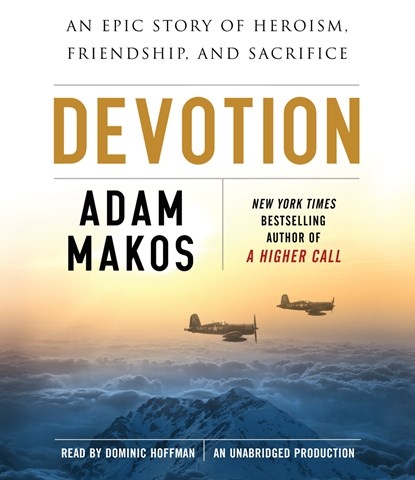 DEVOTION An Epic Story of Heroism, Friendship, and Sacrifice

Narrator Dominic Hoffman deftly conveys this account of loyalty and camaraderie in the Korean War. The story depicts the lives of two Navy pilots--Ensign Jesse Brown, who was one of the first African-American Navy aviators, and Lieutenant Tom Hudner, who was white. The arc of the story recounts the fateful events that bring them together with the Marines they support on the ground. Jumping between the Navy and the Marines, the account describes the lives of men from diverse backgrounds--from their youth in the years before the Korean War to to the fateful day when their lives intersect near the Chosin Reservoir in December 1950. Hoffman delivers this story of self-sacrifice in a clear, deep voice. His performance is an effective match of voice and text. M.T.F. [Published: JANUARY 2016]