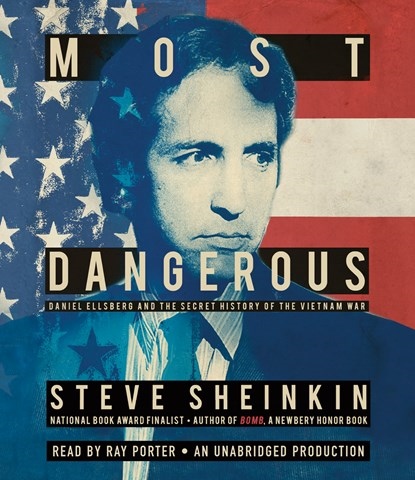 Ray Porter narrates in a "you-are-there" style that is well suited to this sweeping story of U.S. involvement in Vietnam. Sheinkin focuses on Daniel Ellsberg's discovery and disclosure of government lies and mismanagement in Southeast Asia spanning more than two decades. Porter skillfully suggests the speech patterns and cadence of a variety of characters, including Vietnamese soldiers and negotiators, Cubans involved with the Watergate break-in, and Presidents Lyndon Johnson and Richard Nixon. While his deft impressions make his completely unvoiced portrayal of Henry Kissinger a disappointment, it doesn’t take away from the power of this production. Written for a teen audience, this work will also appeal to adults. Listeners unfamiliar with the Vietnam War, the Pentagon Papers, or the Watergate scandal may be shocked by the vulgarity of the Oval Office tapes that ultimately brought down the Nixon presidency. S.G. © AudioFile 2015, Portland, Maine [Published: OCTOBER 2015]