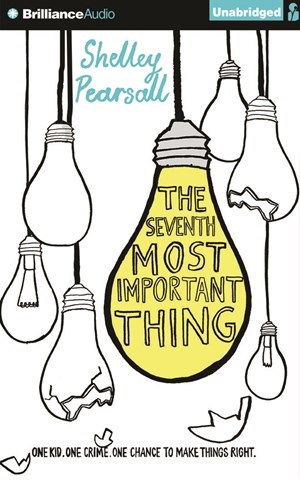 THE SEVENTH MOST IMPORTANT THING

Nick Podehl capably narrates this story of grief, loss, and redemption. On a cold day in early November 1963, in Washington, D.C., Arthur T. Owens throws a brick at an elderly gentleman known as "the junk man," and so begins a series of revelations. Initially, Podehl's performance is marked by sharp tones and a strident delivery; however, as Arthur, his voice softens to reveal a vulnerable 13-year-old boy who is grieving the loss of his dad. Eventually, Podehl's entire performance softens, reflecting Arthur's growing self-awareness. James Hampton, "the junk man," is a pivotal character in Arthur's life despite his limited dialogue, and Podehl does well in creating a memorable presence that allows Hampton to linger in listeners' minds long after he's stopped speaking. A.S. © AudioFile 2015, Portland, Maine [Published: DECEMBER 2015]