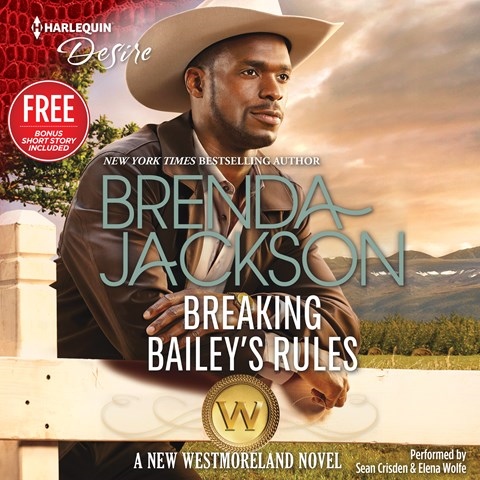 When the Outlaw family discovers they’re distant cousins of the Westmorelands, they send family friend Walker Rafferty to scope things out. Walker’s Westmoreland hostess, Bailey, tempts him to forget his disastrous first marriage in favor of making his own Westmoreland love connection. Narrator Sean Crisden’s major challenge is Jackson’s extensive use of dialogue, which can involve a dozen different speakers in one scene. Crisden creates many sexy voices for Bailey’s brothers and the Outlaw brothers and keeps all the speakers straight for listeners. Bailey’s voice as depicted by Crisden is less successful as it’s nasally and starchy. Narrator Elena Wolfe captures the loneliness and hope of a woman named Lucy in the additional novella about a rancher’s second chance at love. Her low register and slight drawl fit the western setting well. C.A. © AudioFile 2015, Portland, Maine [Published: DECEMBER 2015]