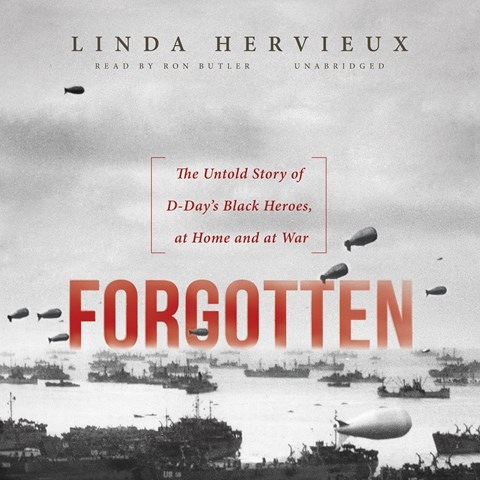 FORGOTTEN The Untold Story of D-Day's Black Heroes, at Home and at War

The brave soldiers of the 320th Barrage Balloon Battalion are remembered in this fascinating account of WWII. Ron Butler respectfully narrates a remarkable story that most of us have never heard featuring the brave African-American soldiers whose floating screen of armed balloons distracted and deflected enemy aircraft in Europe. Butler's clear delivery is unpretentious, even elegant, as he describes the courage of these young Americans thrust onto the front lines of battle. Describing the shocking disparity between American prejudice and European attitudes of acceptance toward the black soldiers, Butler maintains a dignified objectivity. His rich voice warms in the personal stories of these young men from Virginia, New Jersey, and Ohio. N.M.C. © AudioFile 2016, Portland, Maine [Published: APRIL 2016]