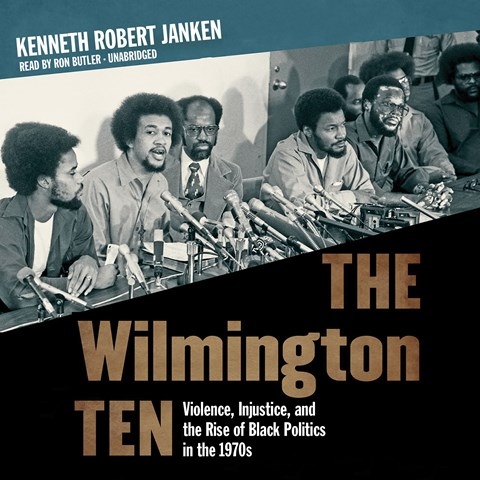 THE WILMINGTON TEN Violence, Injustice, and the Rise of Black Politics in the 1970s

Janken's account of racial injustice in North Carolina proves even more enlightening through Ron Butler's powerful narration. In 1971, in Wilmington, 10 Civil Rights activists--nine African-American young men and one white woman--were wrongly convicted of arson and conspiracy and served four to six years in prison before their convictions were overturned. Janken explores the decades-long racial tension in the city, confrontations around school education, prosecutorial deceit, and the aftermath of the overturned sentences. With a deep voice and deliberate tone, Butler guides listeners through the events and differing points of view. His steady cadence at times seems too calm for the explosive situations being described. However, his emotional distance allows listeners to focus on the substance of the firsthand accounts. L.E. © AudioFile 2016, Portland, Maine [Published: JANUARY 2016]