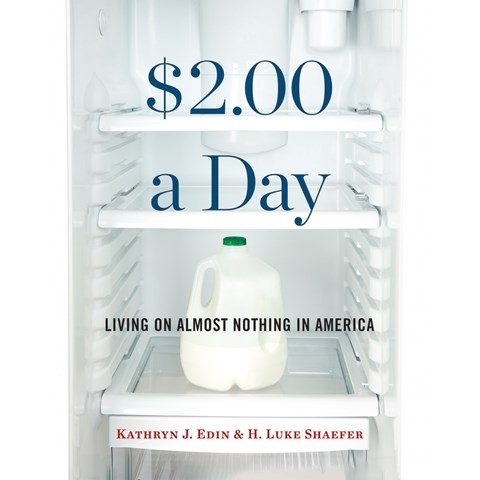 $2.00 A DAY Living on Almost Nothing in America

This important work describes the plight of the millions of Americans living in extreme poverty through the stories of eight families across the Midwest, from Chicago to the Mississippi Delta. The accounts are both shocking and nuanced, illustrating both the burden and the complexity of extreme poverty in the United States today. Allyson Johnson’s strong, matter-of-fact alto voice presents the material clearly. She has taken the time to learn the names, both geographical and personal, that appear in the text. Her dialogue is excellent, making it clear who is speaking without distracting the listener from their stories. The authors are proponents of a new round of welfare reform in the United States and set out their solutions in the audiobook’s last chapter. F.C. © AudioFile 2015, Portland, Maine [Published: DECEMBER 2015]