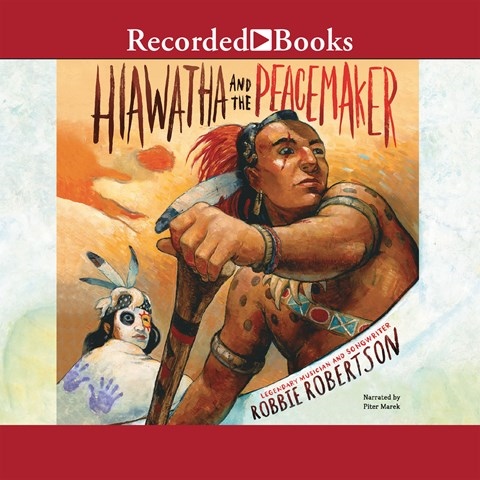 HIAWATHA AND THE PEACEMAKER

Piter Marek uses a simple, unadorned style to narrate this tale by singer-songwriter Robbie Robertson. The legend of Hiawatha and the Peacemaker was told in the oral tradition to a 9-year-old Robertson in his native Canada. Marek movingly reveals that because the Peacemaker had a stutter, he asked Hiawatha to be his voice. This occurred just after Hiawatha had lost his family in a bloody attack by Chief Tadodaha. Marek's Peacemaker, through Hiawatha, convincingly explains that the Iroquois nation would destroy itself with ongoing war and that only forgiveness would heal them. They slowly persuaded the Onondago, Mohawk, Cayuga, Seneca, and Oneida tribes to unite and govern themselves in a method that inspired the United States Constitution. Listeners will appreciate the helpful historical and author's notes that add clarification to the text. S.G.B. © AudioFile 2016, Portland, Maine [Published: FEBRUARY 2016]