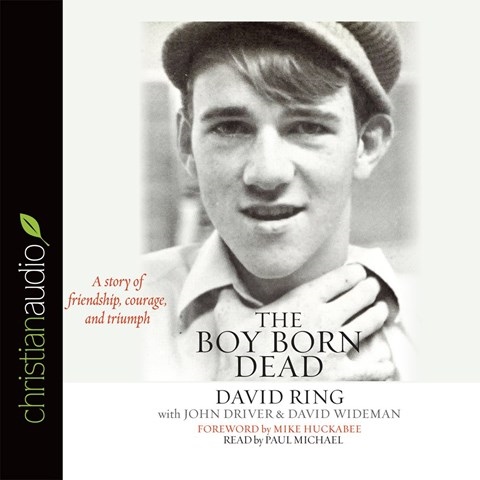 BOY BORN DEAD A Story of Friendship, Courage, and Triumph

Narrator Paul Michael passionately conveys the painful but ultimately uplifting story of David Ring, who developed cerebral palsy at birth after having been declared dead and deprived of oxygen for 18 minutes. The remarkable story is flawlessly recounted by Ring's friend David Wideman, who intervened when classmates at Ring’s new school were beating him. Michael brings listeners into Ring's life by portraying his difficult-to-understand manner of speaking and describing how he overcame despair to become an international speaker who shares his story of redemption. The substory of Wideman, Ring's lifelong friend, adds further interest and authenticity. Michael's well-rendered, diverse characters and vivid descriptions movingly carry the story to its inspiring conclusion. S.G.B. 2016 Audies Winner © AudioFile 2016, Portland, Maine [Published: JANUARY 2016]