Home»Reviews»"WHY IS THIS NIGHT DIFFERENT FROM ALL OTHER NIGHTS?" 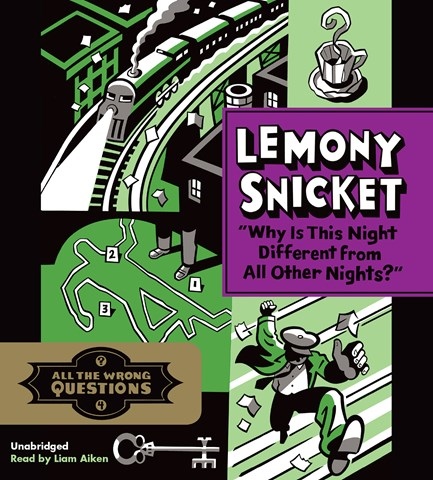 "WHY IS THIS NIGHT DIFFERENT FROM ALL OTHER NIGHTS?" All the Wrong Questions, Book 4

Narrator Liam Aiken skillfully brings this series finale to a satisfying conclusion. Finally, Lemony believes he has answers to his many questions--but does he really? The story's train setting is unique and adds a thrilling sense of place as Stain'd-by-the-Sea is left far behind. Aiken presents the story's clever wordplay and vocabulary in a lively manner that will appeal to young listeners. Lemony must ascertain who murdered one of his heroes, librarian Dashiell Qwerty. Because he loves libraries, librarians, and books, Lemony's sadness is audibly apparent in Aiken's tone. As Lemony and his associates sift through clues, they share tidbits about their favorite authors and books. It's a challenging listen as the suspects continually shift. Aiken's best creation is Hangfire, whose sarcasm and creepy voice will keep listeners on edge. S.G.B. © AudioFile 2015, Portland, Maine [Published: DECEMBER 2015]