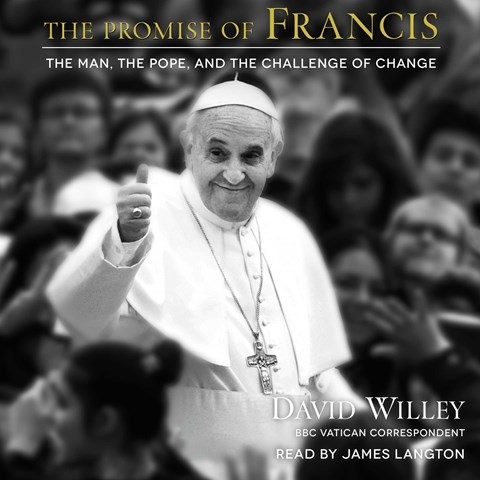 THE PROMISE OF FRANCIS The Man, the Pope, and the Challenge of Change

The "Francis effect" is the catchphrase used often in this audiobook to characterize the response to Pope Francis. Narrator James Langton is kept on his toes with the many priests, bishops and cardinals who are quoted and described herein. His fluency with Latin, Italian, Spanish, and other quoted languages is extraordinary. The world has taken to Pope Francis's messages of mercy for the millions of Catholics everywhere who have been disenchanted by the Church's recent scandals. In a voice filled with enthusiasm and charm, Langton expresses the author's fervent hope that this pontiff will bring a breath of fresh air into a troubled church. E.E.S. Winner of AudioFIle Earphones Award © AudioFile 2015, Portland, Maine [Published: DECEMBER 2015]