Home»Reviews»LAFAYETTE IN THE SOMEWHAT UNITED STATES 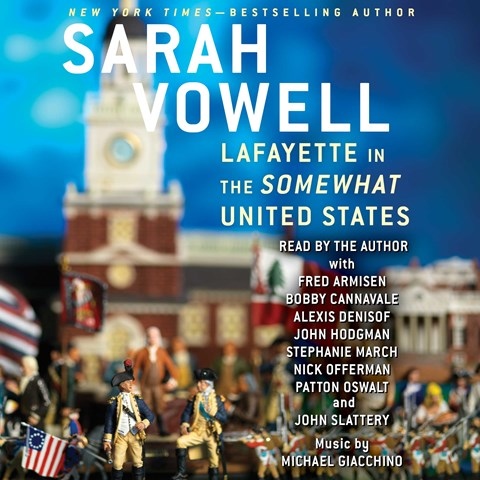 LAFAYETTE IN THE SOMEWHAT UNITED STATES

With her trademark droll and distinctive delivery and a wonderfully sharp ear for quotable facts and intelligent mischief, radio personality Sarah Vowell introduces listeners to the 19-year-old French aristocrat Marie-Joseph Paul Yves Roch Gilbert du Motier de Lafayette, Marquis de Lafayette, who arrived in Philadelphia in the early days of the American Revolution; became a confidant of Washington, Jefferson, and Hamilton; and went on to become one of the most ardent and important supporters that the embryonic United States ever had. An A-list of recognizable voices, including those of John Hodgman reading John Adams and Nick Offerman portraying George Washington, delivers dozens of quotes from our forefathers. Vowell deftly stirs together tones of satire, superlative research, and, yes, patriotism to make American history irresistible. If she isn’t a national treasure, she should be. B.P. Winner of AudioFile Earphones Award © AudioFile 2015, Portland, Maine [Published: NOVEMBER 2015]