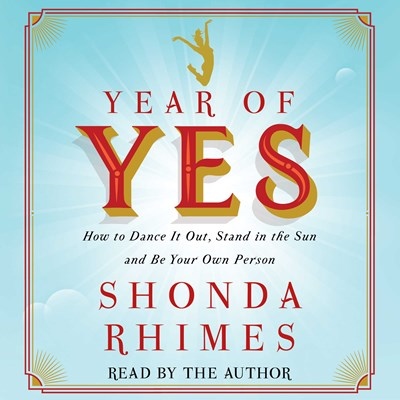 YEAR OF YES How to Dance It Out, Stand in the Sun and Be Your Own Person

The author's jaunty pace makes her book sound like a stream-of-consciousness monologue that occasionally becomes unhinged. But there's such a huge vein of wisdom running through it that it works as an audio, not just because of her endearing drive to sound dramatic but also because of her bountiful compassion for timid people everywhere. Rhimes is an acclaimed TV producer and screenwriter ("Grey's Anatomy," "Scandal") who describes her recent effort to break out of her shell by doing everything offered to her that she fears. What makes this such a powerful audiobook is that, behind her colloquial language and assertive style, you can appreciate the work it took for someone this shy to begin making public appearances and to perform this excellent inspirational audio. T.W. © AudioFile 2015, Portland, Maine [Published: DECEMBER 2015]