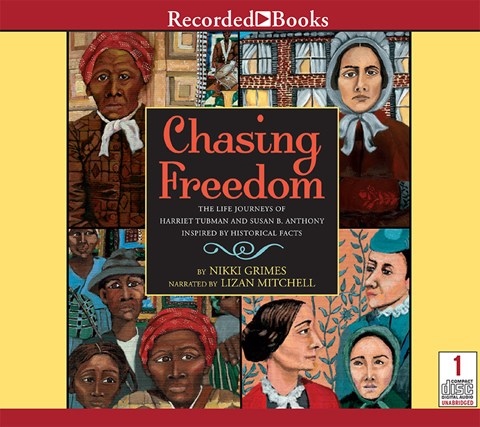 CHASING FREEDOM The Life Journeys of Harriet Tubman and Susan B. Anthony, Inspired by Historical Facts

Straightforwardly, narrator Lizan Mitchell sets the book's historical scene. It's 1904, and Susan B. Anthony is to introduce Harriet Tubman at the 28th annual convention of the New York Suffrage Association. Mitchell's narration turns rhythmic as she delivers the lyrical writing of Nikki Grimes, who pictures the two women meeting over tea. Awaiting her guest, Anthony describes Tubman as a woman whose stories are "river deep." Mitchell actualizes that characterization in a voice that is deep, slow, and sonorous. Mitchell's portrayal of Anthony is crisp, with forceful bursts that reveal her beliefs and oratory skills. The audiobook's breadth is vast as it speaks of slavery, women's rights, and other historical events and people. Mitchell's vocal range enlivens the historical stories, the women's remembrances, and the interplay of their conversation. S.W. © AudioFile 2016, Portland, Maine [Published: JANUARY 2016]