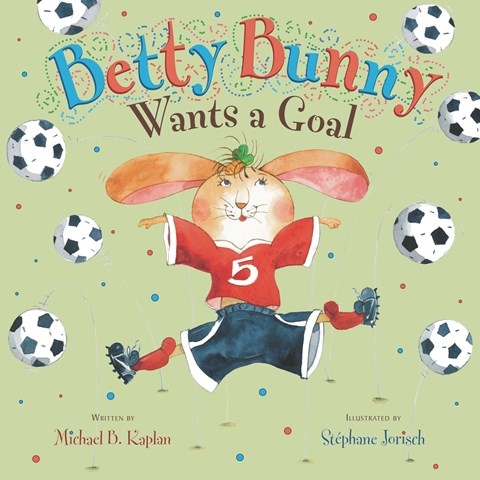 by Michael B. Kaplan | Read by Katherine Kellgren

Betty Bunny's intense personality and over-the-top reactions make her a handful. With pseudo-innocence, she's smuggled chocolate cake to school in her sock, blamed others for her missteps, and demanded to have every toy in the store. But Betty Bunny's fans will see a new facet of the popular heroine in her fourth adventure. She's not filled with her usual self-assurance after her first soccer game. The overconfident Betty, who was certain she'd score 10 goals, fails and wants to give up. Katherine Kellgren's crisp, mostly sunny narration matches the lively pictures of author-illustrator Michael Kaplan. Kellgren also captures the roller-coaster emotions of the fiercely competitive bunny. Sound effects enhance the humor as does Kellgren's wry portrayal of Betty's older brother, Bill, who costars in this adventure. S.W. © AudioFile 2016, Portland, Maine [Published: MARCH 2016]