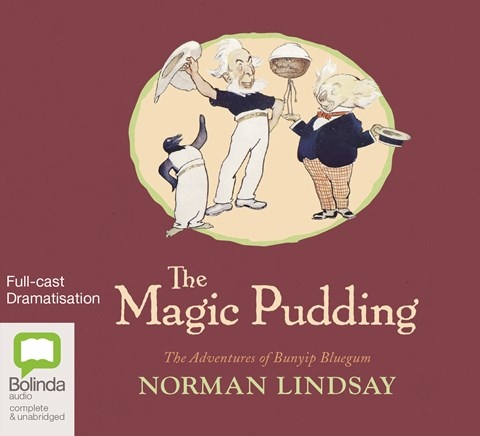 by Norman Lindsay | Read by a Full Cast

In this full-cast adventure, Bunyip sets out on the road, where he meets Bill Barnacle and Sam Sawnoff, a penguin who sounds more than a little like Mickey Mouse. They're the owners of a magical talking, never-ending pudding named Albert. Bunyip joins the pudding's owners, who often erupt into song or rhyme, and the trio stave off pudding thieves at every turn. If the listener isn't aware that this is a classic Australian tale, the accents, bandicoots, and koalas will give it away soon enough. Although replete with outdoor sounds--birds, rustling leaves, and a harmonica played by a campfire--this production sounds like it was recorded from a stage rather than a studio. The hectic presentation is a bit hard to follow--but suits the madcap adventure. L.T. © AudioFile 2016, Portland, Maine [Published: FEBRUARY 2016]