Home»Reviews»THE GENERAL AND THE GENIUS 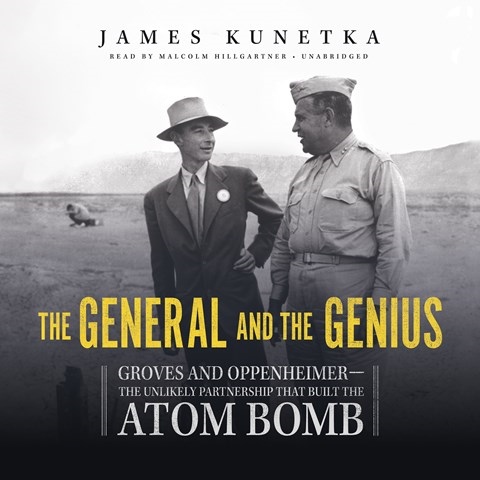 Kunetka’s audiobook provides the listener a concise and clear history of the events that led to the creation of the first atomic bomb, and a portrait of the two disparate personalities that led its development. Narrator Malcolm Hillgartner’s timbre, intonation, and clarity suggest those of a radio announcer from the early twentieth-century period in which these events take place. Authoritarian General Leslie Richard Groves and physicist Robert Oppenheimer represent two seemingly incongruent approaches to the goal of building the vital weapon before the Nazis. Hillgartner’s delivery is confident and direct as General Groves advocates a no-nonsense military approach, and Professor Oppenheimer focuses on the minute scientific details. S.P.C. © AudioFile 2016, Portland, Maine [Published: MARCH 2016]