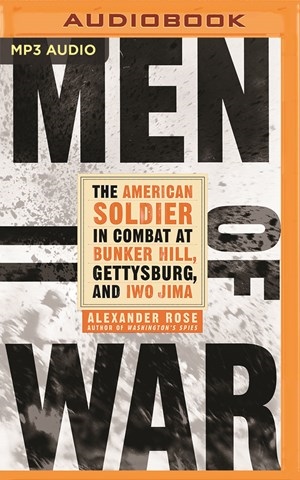 MEN OF WAR The American Soldier in Combat at Bunker Hill, Gettysburg, and Iwo Jima

David Marantz's staccato delivery works well for this American counterpart to John Keegan's classic of European war history, THE FACE OF BATTLE. Looking at the American soldier in battle at Bunker Hill (1775,) Gettysburg (1863,) and Iwo Jima (1945,) we see war not as the generals present it in memoirs but as the common "grunt" experienced it. Drawing on numerous diaries and personal accounts, the author goes into great detail describing the equipment, unit organization, tactics, wounds, and overall experience of being a soldier in each of these engagements. This may seem to be a bit much, but Marantz ably keeps the listener's attention with a narration that is quite expressive. He makes the production seem more like a conversation, albeit one-way, directed at the individual listener, than a performance to a large audience. M.T.F. [Published: JANUARY 2016]