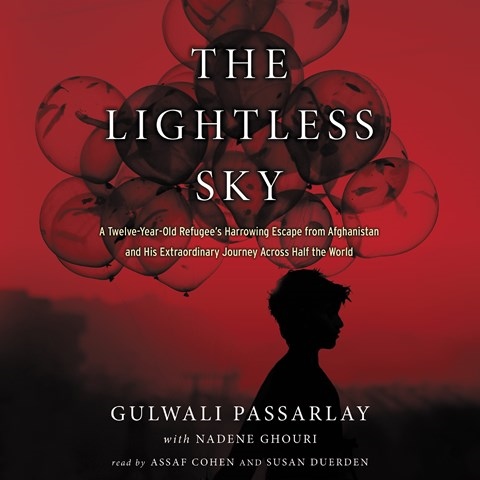 Narrator Assaf Cohen so perfectly captures the voice of an expressive kid that it's hard to remember he isn't the author of this enthralling memoir. Gulwali Passarlay, now grown, recounts the story of his journey from Afghanistan to Europe when he was 12. Starting aboard a sinking boat in the Mediterranean, we flash back to the beginning of Gulwali's adventure. The author had a happy childhood in a conservative family until the murder of his father and grandfather propelled him and his brother to flee their home and head to Greece with a “fixer.” When the brothers lose each other, Gulwali survives on his wits and the kindness of strangers. Cohen nails both the nasty and nice characters—everyone from Kurd to Englishman—and brings moving expression to Gulwali’s growing confidence amid enough terrors for a lifetime. A.C.S. Winner of AudioFile Earphones Award © AudioFile 2016, Portland, Maine [Published: FEBRUARY 2016]