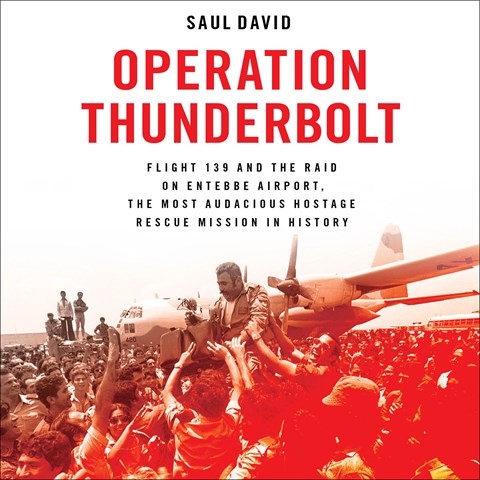 OPERATION THUNDERBOLT Flight 139 and the Raid on Entebbe Airport, the Most Audacious Hostage Rescue Mission in History

An event as exciting as the 1976 Israeli raid on the airport in Entebbe, Uganda, needs no added drama. But Peter Ganim's narration of this chronicle is not without emotion. Those expressed in Israeli Cabinet meetings--frustration, anger, fear, and, ultimately, triumph and relief--come through clearly in Ganim's narration. For most of the work, he adopts a straightforward tone in keeping with the author's text, which is chronological and episodic, each segment opening with the time. In other words, he doesn't let his reading get in the way of the story itself. Ganim also handles the wide variety of foreign names with ease, which keeps the narrative from faltering. As the world watched to find out what would happen to those on the Air France plane hijacked by the PLO, the Israeli commandos closed in. R.C.G. © AudioFile 2016, Portland, Maine [Published: MARCH 2016]