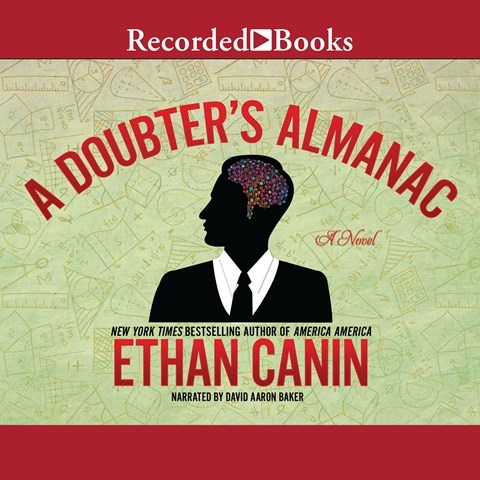 David Aaron Baker’s delivery of this outstanding novel is a tour de force of the narrator’s art. The audiobook unspools the troubling, complex, yet fascinating family history of Milo Andret, a mathematical genius and tortured soul whose gifts aggravate his destructive nature. His brilliant children—his son, Hans (who narrates); his daughter, Paulie; and his long-suffering spouse, Helena—all suffer from his alcoholism and bipolar behavior. Baker gives each family member a distinct voice and memorably acts out a violent scene with such restraint that the listener imagines himself in the room. The repartee between the gravelly voiced aging father and the brainy son is skillfully portrayed. Be it the subtle musings of an Egyptian doctor or the fast-clipped banter of Milo’s lifelong rival, Baker masterfully turns this complex story into a mesmerizing modern tale. A.M. Winner of AudioFile Earphones Award © AudioFile 2016, Portland, Maine [Published: MAY 2016]