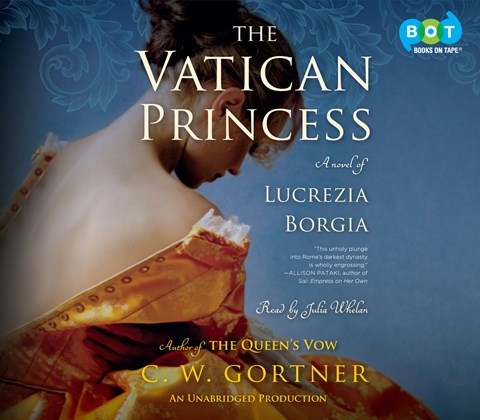 THE VATICAN PRINCESS A Novel of Lucrezia Borgia

C.W. Gortner returns to the women of Renaissance Europe with this fascinating novel about the life of Lucrezia Borgia. Julia Whelan does a marvelous job narrating this first-person account of Lucrezia's controversial life. Gortner paints Lucrezia as being apart from but ultimately doomed by the infamous actions of her father and brothers. Whelan's performance hits all the right emotional notes to convey Gortner's sympathetic picture of this much used and abused woman. Gortner does not skip over the more outrageous rumors about Lucrezia, which circulate to this day, but instead shows how they may have erroneously come into being. Whelan's open and honest portrayal means the listener remains firmly on Lucrezia's side, even when she makes horrendous mistakes. J.L.K. © AudioFile 2016, Portland, Maine [Published: MARCH 2016]