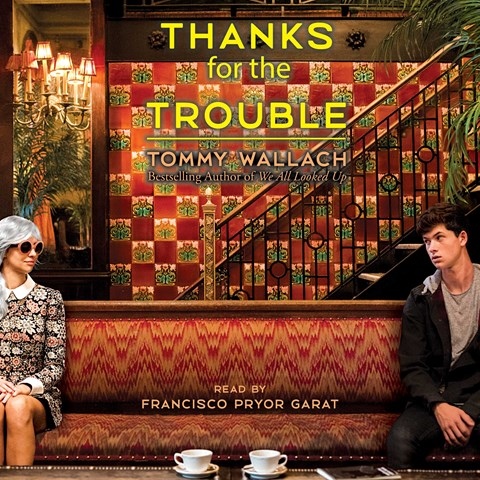 THANKS FOR THE TROUBLE

Seventeen-year-old Parker has been unable to speak since his father's death in a car accident years ago. Narrator Francisco Pryor Garat gives a subdued performance that reflects Parker's detachment when he meets and spends two adventurous days with Zelda, a girl who defies categorization. Garat reads with a Spanish accent, an odd choice considering that Parker was born and raised in San Francisco speaking English. The accent becomes jarring when Garat uses it for Zelda's dialogue as the character is said to be speaking in a Southern accent. Even so, Garat's earnest tone gives words time to breathe and slowly builds the hope that grows in Parker and finally brings him back to the world. Unusual, surprising, and moving. A.F. © AudioFile 2016, Portland, Maine [Published: MAY 2016]