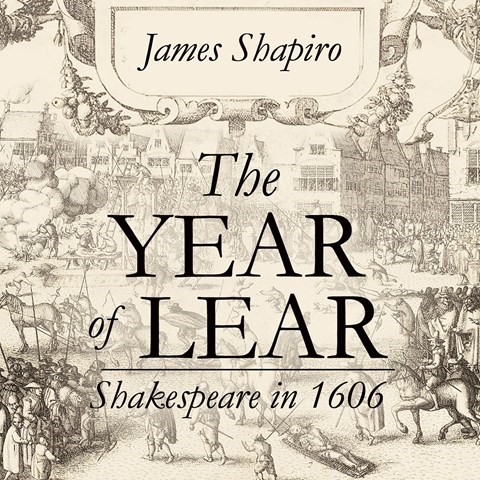 THE YEAR OF LEAR Shakespeare in 1606

Deep religious schisms, the threat of terrorist revolution, a return of a deadly pandemic. Today's headlines? No, it's 1606. With a voice of gentle authority and a good command of historic detail and literary deconstruction, Audie-winning narrator Robert Fass takes the listener on a fascinating tour of a pivotal time in William Shakespeare's life and career. This is when his "King's Men" acting troupe presented KING LEAR, MACBETH, and ANTONY AND CLEOPATRA to their patron, King James I, all in the same year. The American-accented Fass leaves aside classic theatrical rhythms and delivers the many passages of the Bard with a conversational clarity that is much appreciated. Whether he's discussing Scottish independence, Guy Fawkes, or the Black Plague, Shapiro's descriptions of Shakespeare's times always sound so distant and so familiar all at once. B.P. © AudioFile 2016, Portland, Maine [Published: FEBRUARY 2016]