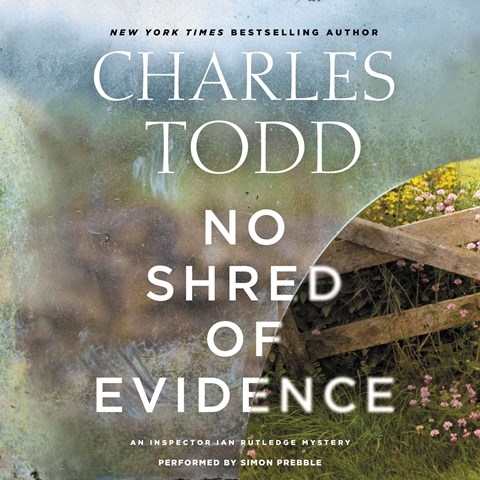 Inspector Rutledge returns in this 18th novel in the beloved series about Scotland Yard in the 1920s. Simon Prebble portrays Rutledge--taciturn and intensely fair-minded as ever--with a steady persistence that suits a time when inter-village communication was limited to telegraph messages and motorcars were rare. Prebble's tone effectively hints at the emotional trauma Rutledge still experiences from the Great War and depicts his flickering interest in a young gentlewoman he knew during peacetime. But she's embroiled with three others who are accused of murdering a villager who appeared to be drowning in a sinking rowboat. Prebble's characterizations of the villagers are distinctive. He capably differentiates the women's voices, and his rich Scots brogue for Rutledge's imaginary associate, Hamish, is downright delightful. N.M.C. © AudioFile 2016, Portland, Maine [Published: FEBRUARY 2016]