Home»Reviews»THIS IS WHERE THE WORLD ENDS 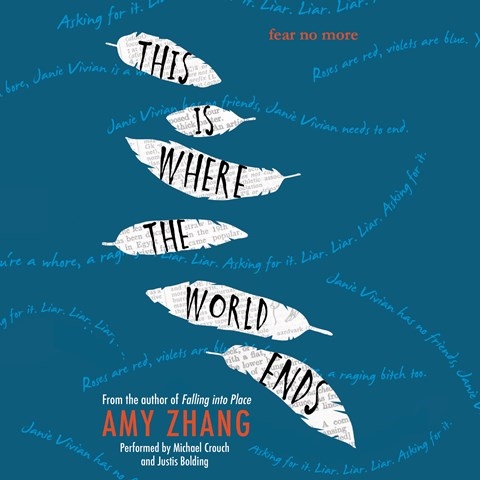 THIS IS WHERE THE WORLD ENDS

Michael Crouch opens the story in an "After" section in which hospitalized 18-year-old Micah Carter recovers from "an accident" he doesn't remember. Crouch wistfully expresses Micah's longing for and lyrical memories of Janie Vivian, his best friend since childhood. In contrast, Micah's abrupt, shocked answers to police express his puzzlement about what has happened. Justis Bolding delivers Janie Vivian's "Before" section, which is composed of journal entries. In contrast to Crouch's subdued tones, Bolding's narration brims with passion, sassiness, and, later, fury for a terrible hurt she keeps hidden. Her emotional highs and lows make sense for the pain she feels and inflicts on Micah. The alternating first-person narratives give excellent perspectives of both protagonists, and their contrasts give dimension to both characters and their powerful secret relationship. S.W. © AudioFile 2016, Portland, Maine [Published: APRIL 2016]