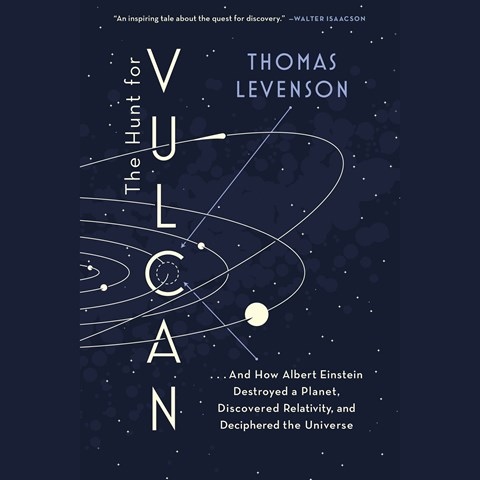 THE HUNT FOR VULCAN And How Albert Einstein Destroyed a Planet, Discovered Relativity, and Deciphered the Universe

Kevin Pariseau's energetic reading keeps listeners entertained as Levenson explores the history of the nonexistent planet Vulcan. After Neptune's place in the solar system was proven, nineteenth-century astronomers turned their attention to Mercury's orbit. They believed that a planet, which they named Vulcan, would eventually be found there, as mathematical calculations indicated. Levenson starts out emphasizing personalities and beliefs, and Pariseau's amused voice make listeners smile over the bickering between nations over credit for Neptune's discovery. When Albert Einstein comes into the story, so do equations. Pariseau keeps it entertaining, even for listeners who aren't science minded. As Einstein thrills at the emerging insights of the time, Pariseau puts that delight in his tone The story keeps listeners involved, while imparting a hint of a message about the limitations of knowledge. J.A.S. © AudioFile 2016, Portland, Maine [Published: JANUARY 2016]