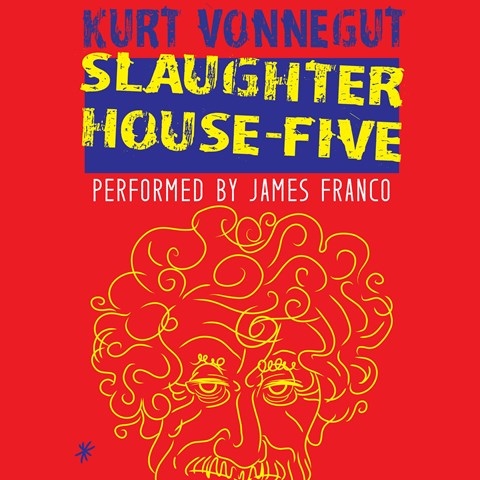 The story of Billy Pilgrim, the time-traveling optometrist, is framed by Vonnegut's experiences as a prisoner of war in WWII. James Franco is an inspired choice as narrator for this anti-war classic. While still young, he still manages to sound world-weary--as if the weight of bombing, prison, and the general destruction of war are pulling him down. Although too sensitive to be an ideal soldier, Pilgrim remains self-possessed despite his capture by Germans and his eventual life in Slaughterhouse Five, a prisoner of war camp in Dresden, a city the Americans firebomb. Franco does a convincing job voicing the accents of the German, Russian, and American soldiers. Pilgrim survives the war and eventually returns to America. There the young ex-soldier studies optometry and marries. On a trip with fellow doctors, Pilgrim's plane crashes, leaving him the only survivor. By this time, Billy is an accomplished time traveler, having been taught how to move through time when he was abducted by aliens and exhibited in a zoo on the planet Tralfamadore. Pilgrim's adventurous life is well worth revisiting. He moves from past to present to future, reliving his imprisonment, his professional life as an optometrist, and his period as the sexual partner of a porn queen on the planet. Franco has fun with the offbeat characters and Vonnegut's quirky text but keeps the overall tone thoughtful. The famous refrain "and so it goes" woven throughout the story is a reminder of the ironies and passages of life, and despite its crazy premise, the tale seems almost believable. Franco's reading gives the 1960s classic a freshness that will appeal to both new listeners and Vonnegut's many fans. C.P.S. © AudioFile 2017, Portland, Maine [Published: JUNE 2017]