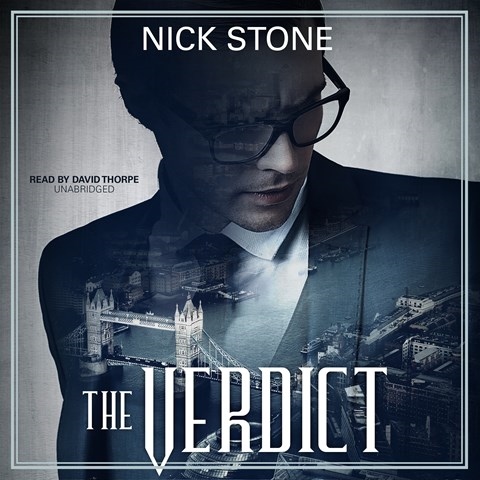 If you've ever wanted to clone Scott Turow, so there would be twice as many whip-smart murder mysteries climaxing in riveting courtroom drama, you just got lucky, big time. THE VERDICT is all of the above, plus it's set in England, so you also get wigs and solicitors and all those great accents. David Thorpe dazzles with his performance. Defense Attorney Terry Flynt is offered a high-profile case; the problem is that he knew the defendant when they were both young, and he feels they have unfinished business. Thorpe portrays Flynt with working-class diction full of glottal stops. But the rest of the characters run the gamut from upper-crust Brits to African immigrants, and Thorpe can do it all. The plot is intricate but tight, and the pace is so pell-mell that if things get baroque in spots, you won't care. This production is jet-propelled and marvelously entertaining. B.G. Winner of AudioFile Earphones Award © AudioFile 2016, Portland, Maine [Published: MARCH 2016]