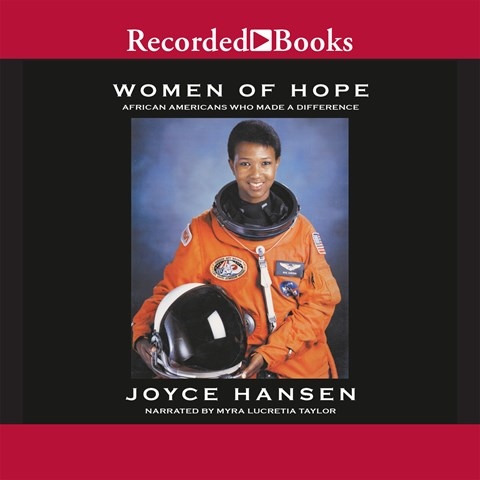 WOMEN OF HOPE African Americans Who Made a Difference

Narrator Myra Lucretia Taylor perfectly conveys the courage of 13 African-American women who became inspirations to so many. She skillfully begins each mini-biography in a different voice as each woman tells her own story. Some inclusions are Ida B. Wells, Ella Josephine Baker, Septima Poinsette Clark, and Fannie Lou Hamer (who famously said, "I'm sick and tired of being sick and tired"). Taylor aptly quotes from the works of Maya Angelou, Alice Walker, and Toni Morrison while her spirited Ruby Dee shares the details of her impressive career as an actress and activist. It's thrilling to hear Mae C. Jemison recall her childhood dream of becoming an astronaut. Equally moving is Dr. Alexa Canady's account of becoming a neurosurgeon. Listeners will be enlightened and motivated. S.G.B. © AudioFile 2016, Portland, Maine [Published: FEBRUARY 2016]