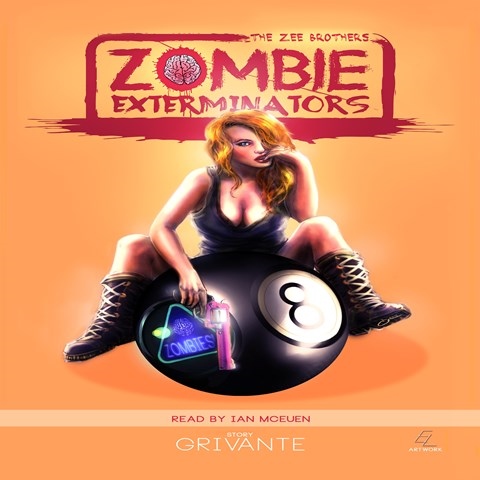 THE ZEE BROTHERS: ZOMBIE EXTERMINATORS Curse of the Zombie Omelet!

The Zee brothers are called to cope with an infestation of undead Native Americans who have been disturbed by landscaping work in a gated community. Get ready to chuckle as this comic book rises from the page in the voice of opera tenor Ian McEuan. The delightfully voiced characters range from the smarter to the goofier brother and from the hot young woman who joins forces with them to the various undead, soon-to-be-dead, and toothless dead. They all romp through a tight plot with appropriate sound effects and music provided by metal rockers Frostbite. McEuan delivers much fun as the gearshift of the Zees’ truck offers suggestive situations for its three passengers. Yes, there IS room for one more zombie listen! F.M.R.G. Winner of AudioFile Earphones Award © AudioFile 2016, Portland, Maine [Published: FEBRUARY 2016]