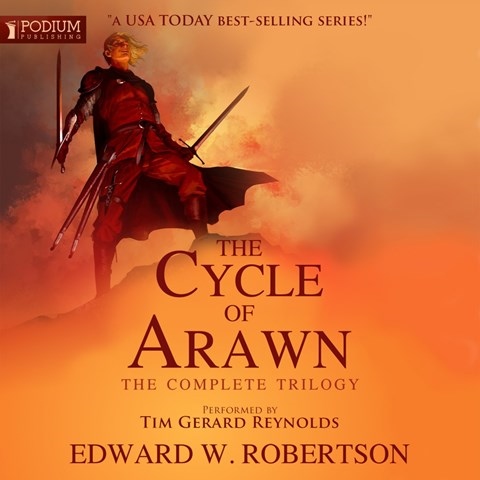 THE CYCLE OF ARAWN The Complete Trilogy

Tim Gerard Reynolds succeeds in the massive task of creating compelling narrations of three complex books in one go. In a world of broadswords and mages, a young thief named Dante stumbles across a book holding the secrets to dark magic that may be the ticket out of his hardscrabble life. However, its owners will do anything to get it back--so Dante hires Blays, a sarcastic bodyguard who becomes an unexpected ally. Reynolds maintains consistency for a myriad of characters over the course of 66 hours. He gives Dante a polished voice as compared to the snide tone of Blays, which takes on an even darker note later in the series when the two have a major falling out. What the plot lacks in cohesiveness is more than compensated for in Reynolds's majestic performance. E.E. 2016 Audies Finalist © AudioFile 2016, Portland, Maine [Published: JUNE 2016]