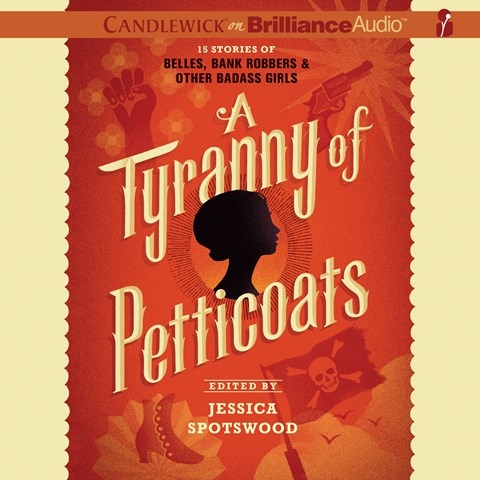 A TYRANNY OF PETTICOATS 15 Stories of Belles, Bank Robbers & Other Badass Girls

Bahni Turpin takes command in this tour-de-force narration of 15 stories by 15 authors about bold American girls. Set in every era from the seventeenth century through the 1960s, and in such varying locations as an Alaskan ice flow and a pirate ship--the stories range from real-life verisimilitude to complete fantasy, with many falling somewhere in between. All are powerful. Turpin gives no sign that the range of characters, eras, situations, and emotions is anything other than easy. She channels, complete with believable accents and intonations, an Inuit girl running for her life, the Three Fates temporarily transformed into prairie girls, a 1960s hippie protester, and a nineteenth-century gorgon murderess, among many others. This is addicting listening for young adults and adults alike. A.C.S. © AudioFile 2016, Portland, Maine [Published: MARCH 2016]