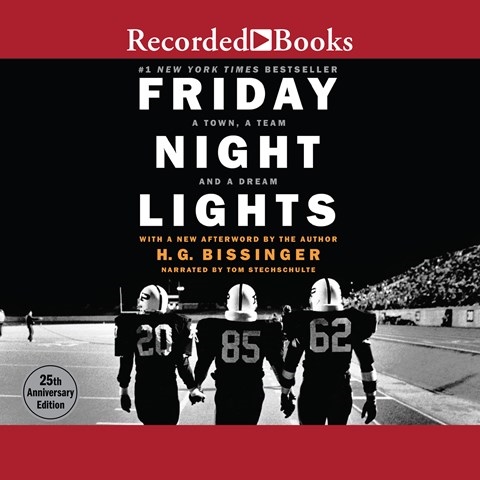 FRIDAY NIGHT LIGHTS A Town, a Team, and a Dream: 25th Anniversary Edition

Football is a violent, physical sport and in Odessa, West Texas, in the 1980s, high school football is king. Tom Stechschulte's aggressively masculine narration couldn't be more appropriate to the material. In his deep voice, he scorns and snarls and drawls and whines, always matching his tone to the characters and their actions in this dispiriting, ugly world of undisguised racism and the primacy of football over academics. It's no wonder that Bissinger was PERSONA NON GRATA there after his book came out in 1990. There's always hope that the world has changed since then. We learn something of the fate of his featured players in an epilogue, written 25 years later. While their fortunes are mixed, the clear affection Bissinger feels for them is evident. A.B. © AudioFile 2017, Portland, Maine [Published: FEBRUARY 2017]