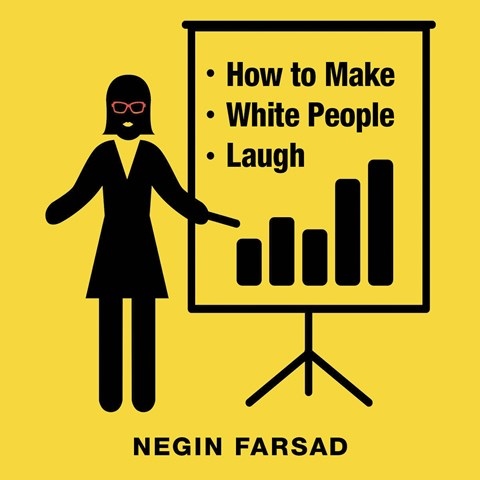 HOW TO MAKE WHITE PEOPLE LAUGH

Comedian and author Negin Farsad matches her razor-sharp observations of life as "Other" with a fast-paced delivery that grabs listeners at the outset and never loosens its delicious grip. As a Muslim American born to Iranian parents who came of age in the years surrounding 9/11, Farsad is well acquainted with Americans' seeming inability to handle the reality of being neither black nor white. Educated in political science and race relations--she has two master's degrees from Columbia--she isn't afraid to use footnotes and sidebars in her performance. A stage-worthy chime sounds for the former and a chorus of other voices announces the latter. Listeners should set aside a big chunk of time because they'll want to hear this audiobook the way through in a single go rather than having to walk away in the middle. F.M.R.G. © AudioFile 2017, Portland, Maine [Published: AUGUST 2017]