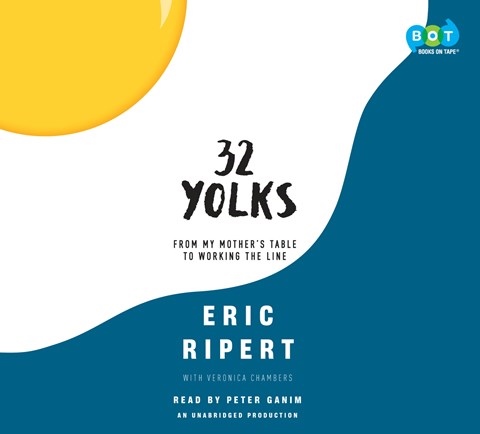 32 YOLKS From My Mother's Table to Working the Line

Peter Ganim's beautiful and moving narration reveals moments of horror, heartbreak, joy, and inspiration as a young boy learns lessons about food and applies them to life. Ganim’s narration of Eric Ripert’s memoir artfully conveys the mosaic of intense emotions experienced by Ripert as a boy who endured traumas such as the divorce of his parents and mistreatment at the hands of his stepfather. As a young adult, he followed his passion, toiling amid the highly competitive world of cooking. Ganim’s narration, accentuated by a fluid French accent, is dynamic and modulated, capturing Ripert’s experiences and responses with anguished and fearful whisperings, deep anger, and, finally, tenderness and humble confidence. It’s a listening experience so compelling that one can almost hear the clatter of kitchenware. M.F. Winner of AudioFile Earphones Award © AudioFile 2016, Portland, Maine [Published: MAY 2016]