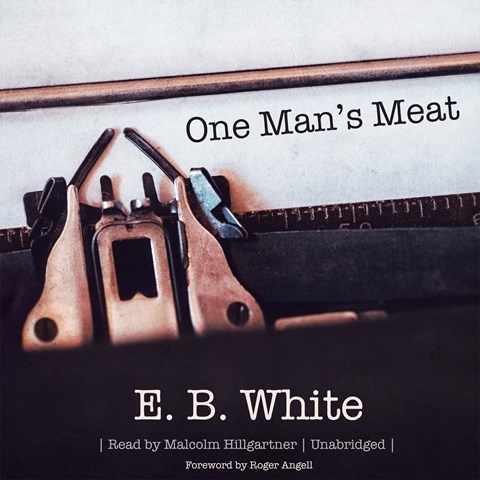 Imagine narrator Malcolm Hillgartner sitting by a fire, pipe in hand and dogs at his feet, addressing a "gentle reader." There's a quaintness to this audio collection from the late E.B. White, now better known for CHARLOTTE'S WEB and STUART LITTLE than for the HARPER'S essays from which ONE MAN'S MEAT derives. But don't let this description of a measured reading of essays set in late 1930s-early 1940s pastoral Maine lull you into thinking there's nothing here to interest today's listener. If anything, you'll be struck repeatedly by parallels to the present. Hillgartner chose wisely: A fast-paced, contemporized narration would have undermined the writing. ONE MAN'S MEAT is an authentically preserved time capsule, packed with lessons for those who learn from history. K.W. © AudioFile 2016, Portland, Maine [Published: SEPTEMBER 2016]