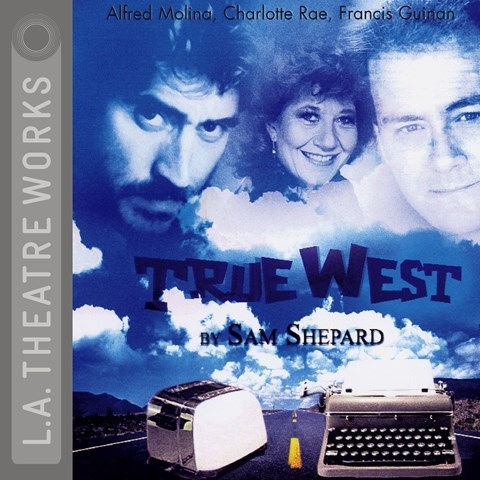 Sam Shepard rose from the fringe theater of ’60s counterculture to become a Pulitzer Prize-winning playwright and movie star. His plays explore the deep roots of competition and violence in the American psyche. Take TRUE WEST, a black comedy about two adult brothers sojourning in their mother’s house while she’s away. One brother writes screenplays; the other commits petty larcenies. They hate each other. They fight. They might even have killed each other had not mom returned from Alaska in the nick of time. The Oscar-nominated Alfred Molina and Fran Guinan, who appeared in the celebrated Steppenwolf Theater production of the play, pour on the testosterone in this vigorous audio version, taped before an appreciative audience. Director Simonson keeps the pace brisk but orchestrates the tempo masterfully from hot to cold and back again. Charlotte Rae as the mother does a wonderful little star turn at the end. Y.R. Winner of AudioFile Earphones Award © AudioFile 2002, Portland, Maine [Published: OCT/ NOV 02]