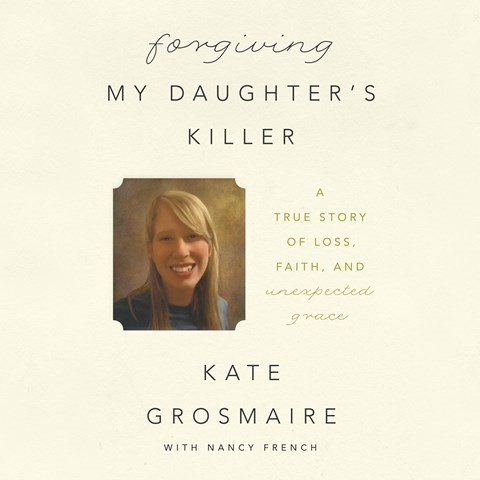 FORGIVING MY DAUGHTER'S KILLER A True Story of Loss, Faith, and Unexpected Grace

AudioFile review pending. FROM THE PUBLISHER: The riveting story of one couple's decision to forgive the man who murdered their daughter and how God is using that act to change the way justice is administered in America--now in paperback. Forgiveness is possible even in impossible circumstances.On March 28, 2010, Kate and Andy Grosmaire received two pieces of news that would change their lives forever.The first was their worst nightmare: "Ann has been shot."The second was the dumbfounding addendum: "Conor was the one who shot her."Their nineteen-year-old daughter had been killed by her boyfriend, a young man who had lived with the family and had come to feel like part of it.In a beautiful, tragic testament to the liberating power of forgiveness, Kate Grosmaire finally tells the whole story of her daughter's death at the hand of her boyfriend--and the stunning, deliberate forgiveness and help that Kate and her husband offered to the young man who shattered their world.Part memoir, part spiritual testimony, Forgiving My Daughter's Killer is the story of a family whose faith was put to the test and so found the capacity to do far more than they could have thought or imagined. [Published: ]