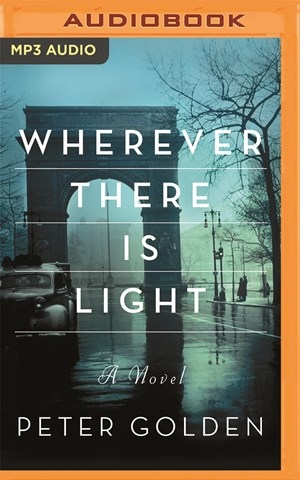 WHEREVER THERE IS LIGHT

Golden's complex story of forbidden love between Julian, a German Jew, and Kendall, a black beauty from Miami, opens in 1965, goes back to 1938, and slowly works its way back to 1965. Narrator Romy Nordlinger's challenge is to keep the myriad characters distinguishable as the story weaves in Prohibition, gangsters, lynchings, WWII, and expats living in Paris. Although she employs stereotypical voices for gangsters, a Southern mayor, a black musician, and a French spy--Kendall and the narrator both sound the same. In addition, Nordlinger's delivery of dialogue, of which there is a lot, often sounds slightly off as she inserts periods where commas should be, blurring the lines between speakers. On the whole, this ambitious story falls short as an audio experience. N.E.M. © AudioFile 2016, Portland, Maine [Published: AUGUST 2016]