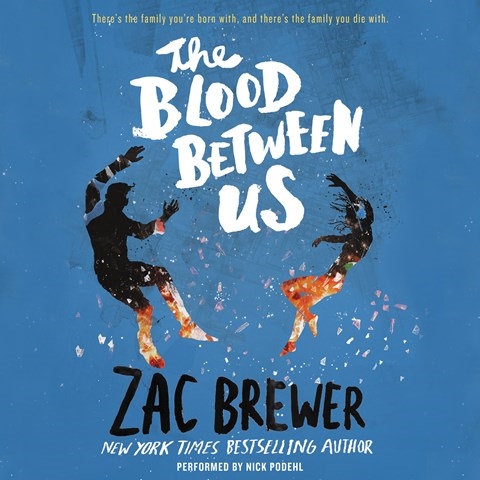 THE BLOOD BETWEEN US

Narrator Nick Podehl's portrayal of two antagonistic siblings captures their furious dialogues as the point-of-view character, Adrien, returns home from boarding school. Distance hasn't diminished Adrien's dislike and distrust of his adoptive sister, Grace, a dynamic that worsened with their parents' freakish accidental death. Podehl captures Grace's volatile comebacks and sudden fits with an intensity that matches his dramatization of Adrien. Rumors of his sister's misdeeds stoke Adrien's fires of discontent to a barely contained emotional blaze. Podehl softens those harsh emotions with hints of Adrien's pain as well as the longing for love that lurks beneath his behavior. Providing counterpoint, Podehl gives a gentle voice to a kindly guardian who wishes for the siblings' resolution. At the story's climax, Podehl escalates Adrien's emotions from confusion, to questioning, and, finally, horror. S.W. © AudioFile 2016, Portland, Maine [Published: JUNE 2016]