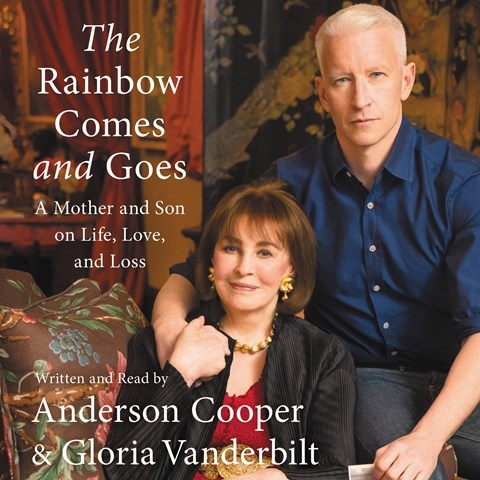 THE RAINBOW COMES AND GOES A Mother and Son On Life, Love, and Loss

This is a bittersweet, touching, and intimate series of email conversations between a celebrated mother and son, much of it in the form of questions and responses. Vanderbilt and Cooper share, sometimes sensational, family histories as well as philosophies on the vicissitudes of life. A CNN and CBS journalist, Cooper has a highly recognizable vocal quality, and his narrative tone is thoughtful, distinctive, and pleasant. His delivery is especially adept in the difficult passages addressing the early death of his father and, later, the suicide of his older brother, Carter. Vanderbilt's skillful, forceful, and distinct narration is remarkable for her 91 years. The widely seen HBO documentary with the same name as this audiobook seems to be a video abridgment of this more expansive work. It's better to get to know your mother or son well late in life--than never at all. This is a moving listening experience. W.A.G. © AudioFile 2016, Portland, Maine [Published: MAY 2016]