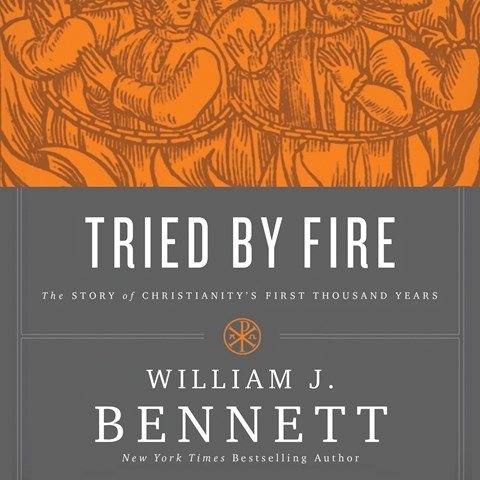 TRIED BY FIRE The Story of Christianity's First Thousand Years

William Bennett's discussion encompasses the creation of Christian doctrine and the struggles to uphold it during its first thousand years. Narrator Wayne Campbell has his work cut out for him. The culture from which Christianity emerged was embroiled in retribution, fear, and suffering for those who professed their faith. Listeners will need a strong stomach for the gruesome descriptions that saturate this work. Through it all, Campbell maintains a solid delivery, giving first-person quotations inflection and tone that emphasize the ardor and determination of the martyrs who were willing to die for their faith. It's a sound performance of the challenges to early Christianity that still plague Christian churches even in modern times. E.E.S. © AudioFile 2016, Portland, Maine [Published: SEPTEMBER 2016]