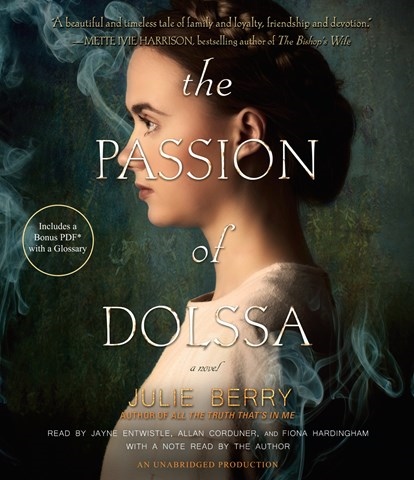 Dolssa, a young woman condemned to burn to death as a heretic, is rescued and hidden by a peasant girl, Botille, in this historical tale set in thirteenth-century France. Fiona Hardingham narrates Dolssa’s sections in a gentle, lilting tone. Jayne Entwistle’s warm, earthy narration brings to life teenaged Botille, her sisters, and the other peasants in Bajas, where the sisters run a tavern. The contrast between the two narrations reaffirms the differences between the two young women’s characters. Allan Corduner’s intense baritone sounds ominous as he portrays the Dominican Inquisitors who pursue Dolssa. The narrators smoothly handle the many words of dialect included in the story. At the end, the author reads extensive historical notes and a glossary. E.C. © AudioFile 2016, Portland, Maine [Published: JULY 2016]