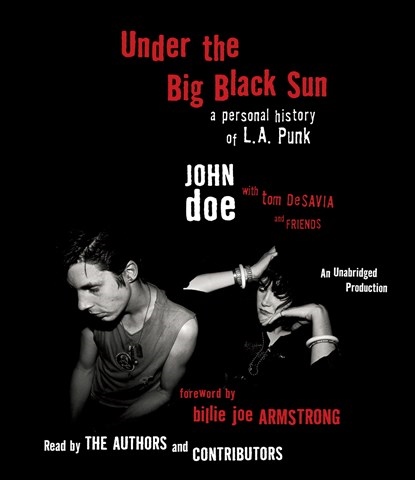 UNDER THE BIG BLACK SUN A Personal History of L.A. Punk

Los Angeles had one of the most fertile punk scenes of the late 1970s, as this audiobook makes abundantly clear with its revolving cast of musicians, writers, artists, and even filmmakers who provide commentary. LA bands were louder, faster, and more outrageous, but not entirely devoid of art, which is where the band X came in. Formed in 1978 by John Doe and Exene Cervenka, the band served as the prototype for a whole generation of inter-gender bands who heralded the sexual politic of the day. In this vivid recounting--rendered in typically egalitarian punk fashion with virtually everyone who was there being heard--the narrators, all differing in style and tone, provide a fitting tribute to the anarchic nature of the scene's origins. J.S.H. © AudioFile 2016, Portland, Maine [Published: JULY 2016]